Take a Seat Under the Stars

The story of Carnegie Science Center begins 80 years ago, with the Buhl Planetarium & Institute of Popular Science. First opening its doors in October 1939 on Pittsburgh’s North Side, it was the fifth major planetarium in the U.S. In October 1991, the newly established Carnegie Science Center continued its legacy at a new location with the opening of The Henry Buhl, Jr. Planetarium & Observatory. Since then, Buhl Planetarium has been a “theater of the stars” enjoyed by generations of Pittsburghers, with in-house produced theatric shows distributed to 1,500 planetariums around the world and translated into 18 different languages. Now it is time to refine the Buhl Planetarium once again.

Take a Seat Under the Stars Campaign

Carnegie Science Center invites you to take part in an exciting opportunity to support the Buhl Planetarium Upgrade Project in an affordable, meaningful way by participating in the Take a Seat Under the Stars Campaign. By purchasing a seat, you will generate funds for immediate use to support additional planetarium upgrades and the development of new, state-of-the-art programming.

The Take a Seat Under the Stars Campaign offers a unique chance to celebrate a loved one, honor a STEM advocate, or give a memorable gift to “the person who has everything” by leaving them a legacy at the Carnegie Science Center for years to come. Seats in the Buhl Planetarium have never been available for naming, so don’t miss out!

Your donation will allow you to choose a name to engrave on a plaque prominently affixed to the armrest of the seat. Your plaque will remain affixed to the seat for 15 years and serve as a reminder to future audiences that your personal commitment helped to make their Buhl Planetarium experience possible.

You can dedicate a seat: 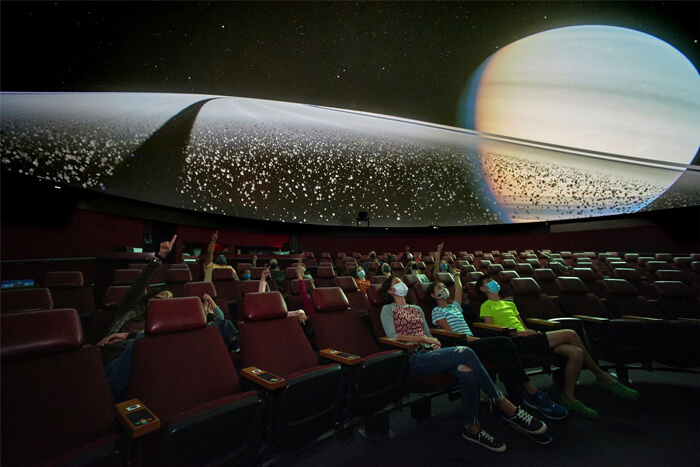 Enhancements to the Henry Buhl, Jr. Planetarium & Observatory have already begun thanks to incredible community support. They include a new Sony projection system that utilizes 10 projectors to create a seamless, synchronized True8K high resolution image— at least 8,000 pixels across every full 180-degree arc on the dome. Plus, every single panel on Buhl Planetarium’s 50-foot-wide Pierce Family Dome was removed and replaced with brand new Spitz NanoSeam panels, manufactured in Pennsylvania, providing a new canvas for the cosmos. New Evans & Sutherland Digistar 7 Software features an extensive library of planetary models, real-time 3D computer graphics, and a catalog that incorporates data from dozens of organizations all over the world to generate the most complete and accurate 3D atlas of the universe. Buhl Planetarium visitors can now travel to other stars and even exoplanets and fly through 3D digital nebulae based on volumetric data.

But don’t worry, you haven’t missed the opportunity to join those helping to bring the planetarium into an exciting future. We’re still writing the next chapter, which will include adding accessibility upgrades to the physical entrance and theater so that visitors of all ages and abilities can enjoy its high-quality programming.

Your support will have a stellar impact. It will allow us to:

We invite you to Take a Seat Under the Stars. We’re positive you’ll enjoy the view!

Please let us know which seat you would like.

If you have any questions or prefer to make your gift in another way, please contact Julie Segner at SegnerJ@CarnegieScienceCenter.org.

Click on the image below to view a PDF of the seating chart in a new window. 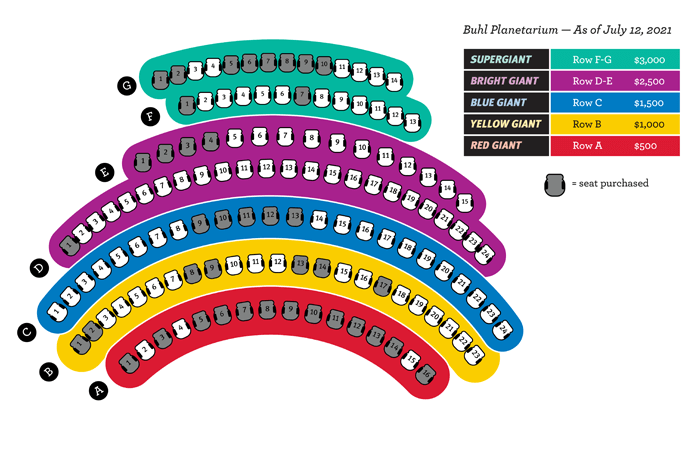 Give $3,000 and become a Supergiant Supporter!

Give $2,500 and become a Bright Giant Supporter!

Give $1,000 and become a Yellow Giant Supporter!

Give $500 and become a Red Giant Supporter!